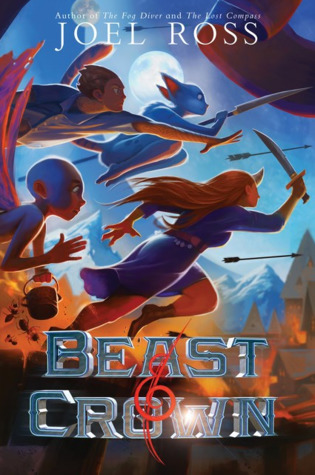 Looking for past newspaper articles?  Search articles from around the world with Newsstream, a global news database.  With both basic and advanced searches, you can find articles and publications from sources that include the Washington Post, the Bismark Tribune, and the Grand Forks Herald, and many more.  Global Newsstream has archives stretching back to the 1980s, providing one of the largest collections of news outlets from the US, Canada, Europe, Africa, Asia, Latin America, and Australia, making this an excellent resource for gaining multiple perspectives for anyone looking to write their own paper on both current and historical events.

This week our featured fiction includes Beast and Crown, by Joel Ross, and Uncommon Type, by Tom Hanks.

Beast and Crown is a children’s fantasy novel about a young boy named Ji, and his group of friends as they risk everything to free themselves from the harsh life of servitude they’ve known so far.  Taking a huge chance, Ji and his friends accompany a young nobleman to the Diadem Rite, a ceremony which will determine the country’s next ruler. What Ji doesn’t know is that the Diadem Rite will require more of him than he ever expected, and that this journey will change all of their lives forever…

Actor Tom Hanks’ Uncommon Type is a collection of seventeen short stories of life and humor, with plots ranging from the story of a gentle immigrant arriving in New York after a life ravaged by his country’s civil war, to that of four friends headed for the moon in a rocketship constructed in their backyard.  The Sunday Mirror describes it as “full of heart”, and is written with “a powerful sense of other lives imagined at a level that goes deeper than writerly research” according to The Guardian.